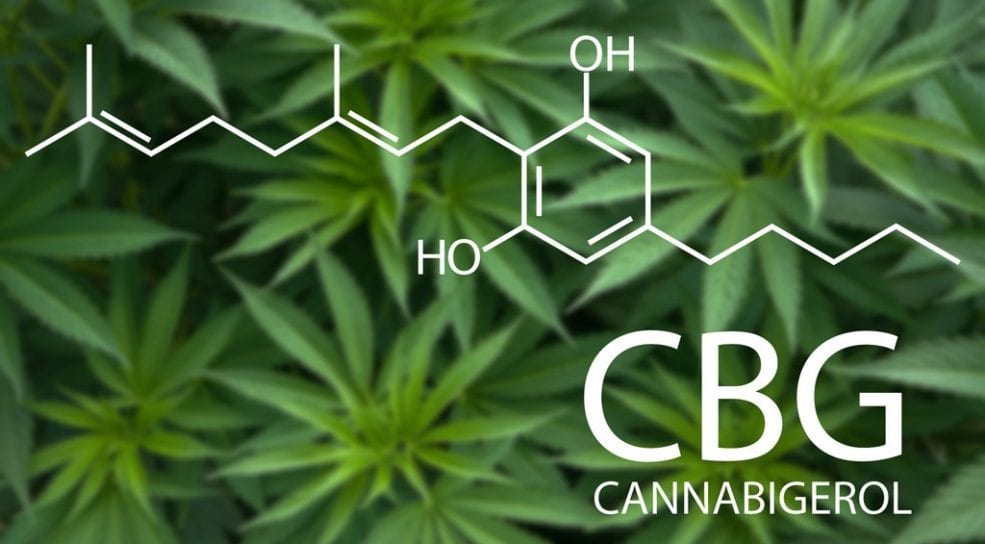 The medical abbreviation of CBG is cannabigerol. CBG or cannabigerol is one of the minor compounds found in marijuana. “Minor “means it’s not present in large amounts (usually less than 1% in most cannabis strains). Cannabigerol is the first cannabinoid that forms in the cannabis plant as it grows and does not contain any psychoactive properties. CBG interacts with the endocannabinoid system (ECS), which supports homeostasis- the process that helps our biological systems remain balanced and functioning optimally. The three major components of ECS are:

CB1 and CB2 receptors regulate the psychoactive process, which affects certain processes such as mood swings, pain, and appetite. When CBG interacts with the brain, it stimulates the brain to process. CBG inhaling properties enhances when it works with other cannabinoids. CBG is a cannabinoid, which means that it is an active ingredient of the cannabis plant. Marijuana has over 120 compounds, and each compound has a different effect on the brain. It depends on whether someone consumes THC, CBD, CBC, CBN, or cannabinoid effect can range from relaxation to anxiety.

History Of CBG or Cannabigerol

CBG was discovered by Gaoni and Mechoulam in cannabis resin in 1964. Biosynthesis of Cannabinoids begins with the combining of geranyl pyrophosphate and Olivetolic acid. CBGA serves as the substrate for the synthesis of other cannabinoids like CBDA and THCA.

While cannabis constituents CBD and THC have been thoroughly investigated, research on CBG has been relatively ignored. Based on established pharmacological properties, there is growing evidence that CBG has therapeutic potential for treating neurological disease, gastrointestinal disease as well as some metabolic disorders.

How Is CBG Produced?

CBG starts out as CBGA, also known as Cannabigerolic acid. This isn’t a phenomenon unique to CBG; cannabinoids all begin their lives as acidic compounds. These cannabinoids lose their ‘A’s through a process known as decarboxylation, which happens whenever cannabis is heated. The common decarboxylation method includes lighting marijuana before smoking it or baking it in the oven before using it for edible. This removes the carboxylic acid from the molecule, turning CBGA into CBG.

Decarboxylation transforms the cannabinoids into their pharmacologically active forms. THC can’t create a euphoric high like THC does because most of the research focused on the activated versions of cannabinoids; it’s unclear whether minor cannabinoids like CBGA must be decarboxylated in order to make the most of their effects.

CBGA: The Origin of Many Cannabinoids

Without CBGA, none of the “big six” most widely researched cannabinoids THC, CBD, CBC, CBN, THCV, or CBG – would exist. All of these cannabinoids start out as CBGA before they are transformed by enzymes within the marijuana plant’s trichomes. As this reaction occurs, the CBGA, is synthesized in THCA, CBDA, CBCA, and so on. During a typical flowering cycle, this process usually takes six to eight weeks.

Because CBG is present in such a low concentration in marijuana, it would be impossible for someone to smoke a particular strain and feel any specific effect that they could directly contribute to CBG. By isolating CBG and studying it on its own, however, scientists have been able to determine certain factors about how it affects people.

Non-intoxicating: It’s clear that CBG is non-intoxicating, similar to the CBG. This can be confusing to people researching the benefits of CBG vs CBD, but the two cannabinoids bind with completely different receptors and work in entirely different ways.

Inhabits The High Of THC: When THC creates an intoxicating high, it does so by binding with the CB1 receptors in the brain. CBG reduces the high created by THC by inhibiting the CB1 receptor preventing THC from stimulating it as strongly.

CBG’s ability to counteract the psychotropic effects of THC, in addition to the way it works when used by itself, makes it a potentially promising treatment for a wide variety of medical disorders. Like CBD, CBG can help boost the levels of natural chemicals in the brain, possibly making it useful as an anti-anxiety treatment and anti-depressant. It helps reduce eye pressure in people with glaucoma and is an excellent anti-inflammatory. CBG can also be used as a neuroprotective agent for people with brain diseases and is helpful in the treatment of breast cancer. It also kills bacteria, stimulates appetite, and decreases bladder contractions in people who have bladder disorders. CBG is very much helpful in many serious health issues. How To Use CBG

Most commonly, CBG is manufactured as an oil for the use of consumers. The benefits of CBG can be obtained through using its oil. However, CBG oils are rare and expensive. Broad-spectrum CBD oils can be used as a substitute for CBG oil. When cannabinoids are used together, they increase the effectiveness of each other and work effectively. This phenomenon is called the entourage effect.