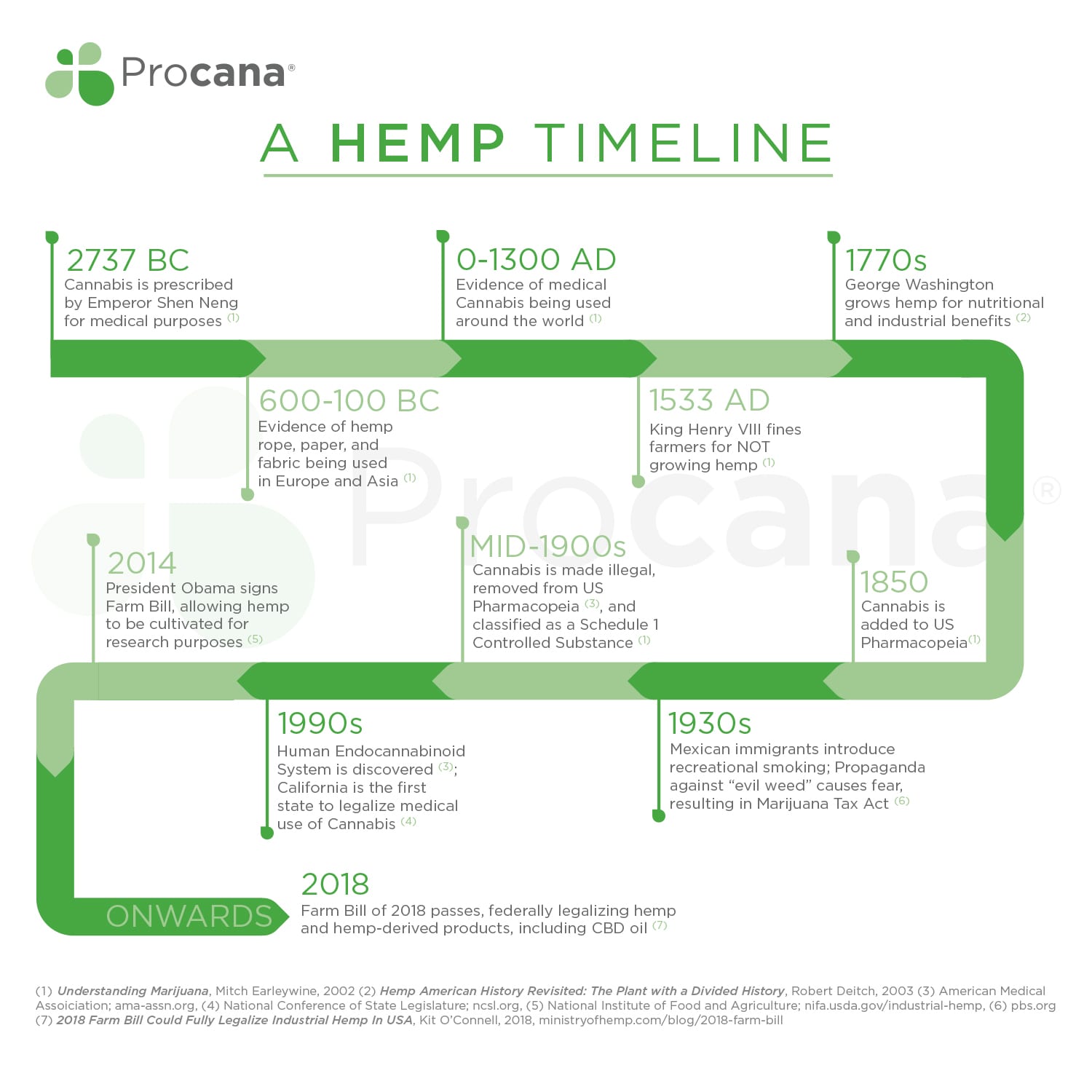 Humans have been using Cannabis for thousands of years. Earliest written evidence we have shows Ancient China using Cannabis for medicinal purposes in 2737 BC. During these times and onward, Hemp has been popular around the world for its medicinal benefits and its many other purposes, such as clothes, paper, biofuel, and food.

Hemp was grown in the United States before it was even America. In May 1607, Gabriel Archer observed Hemp being cultivated by the Natives at the main Powhatan village, where Richmond, Virginia is now situated.

In the 1770s, George Washington pushed for the growth of hemp and even grew hemp himself, as it was a cash crop commonly used to make rope and fabric. Additional presidents known to have farmed hemp include Thomas Jefferson, James Madison, James Monroe, Andrew Jackson, Zachary Taylor, and Franklin Pierce.

“Make the most of the Hemp seed. Sow it everywhere.”
–George Washington

In the 1970s, President Nixon declared a “War on Drugs” and signed into law the Controlled Substances Act of 1970, a statute that regulates all cannabis, including industrial hemp. This law established a set of banned drugs and created the Drug Enforcement Administration (DEA). It also unintentionally outlawed one of the world’s oldest domesticated crops, hemp. This not only led to the demise of hemp but also an increased misconception of the plant.

In 2004, the 9th Circuit Court of Appeals ruled that the DEA did not have the authority to regulate these specific parts of Hemp under the Controlled Substances Act. Hemp could therefore still be imported and those parts of the plant used for products.

In 2015, The Industrial Hemp Farming Act (H.R. 525 and S. 134) was introduced in the House and Senate. If passed, it would remove all federal restrictions on industrial hemp and legalize its cultivation.

In June 2018, House-Senate passed the Hemp Farming Act of 2018, which will remove hemp from the DEA’s list of controlled substances, and fully legalizing hemp and hemp-derived products, including CBD oil.

“Hemp is of first necessity to the wealth and prosperity of the nation.”
—Thomas Jefferson
Sources:
-Gabriel Archer, A Relation of the Discoverie of Our River…, printed in Archaeologia Americana 1860, William Strachey, 1612
-Jefferson’s Memorandum Books: Accounts, with Legal Records and Miscellany, 1767–1826. James A. Bear Jr and Lucia C. Stanton, 1997
-The Great Book of Hemp: The Complete Guide to the Environmental, Commercial, and Medicinal Uses of the World’s Most Extraordinary Plant, Rowan Robinson, 2010
-Understanding Marijuana, Mitch Earleywine, 2002
Also read: What Is Full-Spectrum Hemp Oil?