The Benefits from CBD Oil for Dogs, Cats & Pets - Procana

The Benefits from CBD Oil for Dogs, Cats, and Pets 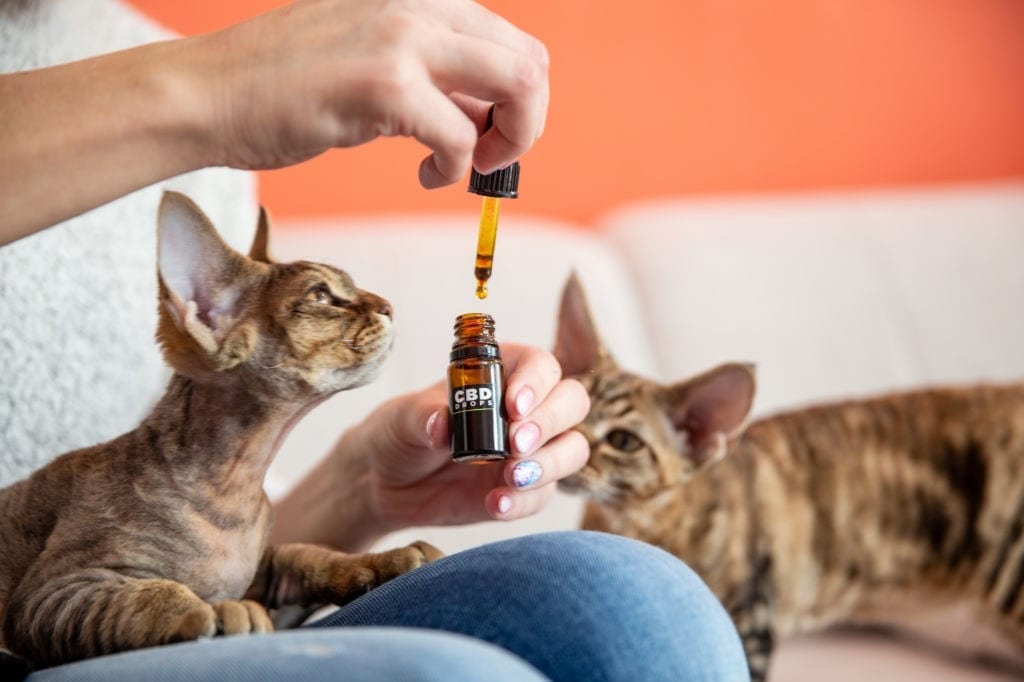 Humans are not the only ones who are getting benefits from cannabis products, as exhibited by heightening interest in cannabinoids for animals as well. Humans using cannabinoids and hemp for their therapeutic benefits for many years, but now, research has been started on the use of CBD, or cannabinoid products for animals. Dogs, cats, and most other animals have an endocannabinoid system just like humans, so they can react to and get benefits from CBD just like us. The objective of this article is to give you an insight into what CBD is, how it interacts with the body, and the benefits of the use of CBD oil for pets.

An Introduction To CBD

CBD is an abbreviation of cannabidiol, a chemical compound found in cannabis or hemp. This belongs to the class of natural chemicals called cannabinoids, which are mainly associated with the health effects of the cannabis plant. CBD is found in almost all cannabis plant species like Cannabis Sativa (including hemp), cannabis indicated hybrid species. CBD interacts with the ECS (endocannabinoid systems), which is found in all mammals, including humans, animals, and even invertebrates. Another compound that is found in cannabis is THC (tetrahydrocannabinol) – which has intoxicating effects, but unlike THC, CBD is a non-intoxicating and non-psychoactive drug that won’t get your pet “high.”

CBD is effective in many health issues for pets like arthritis, anxiety, chronic pain, and inflammation. Although there is not much research is done on the effects of CBD on dogs and cats, but on the basis of rodent studies and veterinarians, surveys suggest that CBD has potential health benefits for pets.

CBD is used by humans to deal with all these conditions and many others, and now research has proved that CBD can be helpful for pets also.

CBD has many potential benefits for dogs and cats. CBD can help to manage pain in pets. It has antidepressant and anti-anxiety effects. It reduces arthritis pain, nausea, and inflammation. It gives relief in epileptic seizures. It promotes the regeneration and healing of healthy bones help. CBD works through both endocannabinoid and non-endocannabinoid systems.

CBD works through interaction with the ECS (endocannabinoid system), a network that naturally produces cannabinoid receptors, endocannabinoids, and special enzymes. ECS regulates the immune system, pain, stress, anxiety metabolism, digestion, and other processes to maintain homeostasis. The ECS is almost found in all animals. Although we don’t know much about the ECS of animals as compared to humans, researchers believe that it might work like humans’ ECS. For example, studies have shown that dogs have CB1 and CB2 cannabinoid receptors like humans and other animals. CBD and other cannabinoids activate this system, and it regulates the immune system of the body.

Benefits Of CBD for Pets

The Most Common Benefits Of CBD Oil for Pets Are as follows.

Side Effects Of CBD

According to the research, CBD oil is generally safe to use in pets and is well tolerated in both dogs and cats. CBD is intoxicating; that’s why the effects of CBD oil are quite modest; it is more about what you stop feeling when you intake CBD. For example, CBD can relieve stress and anxiety.

In a study, researchers experimented on six dogs and eight cats with a 2mg per kg dose of CBD for three months in the form of infused CBD oil. The researchers found no negative impact on the use of CBD.

There are some minor side effects of CBD oil on pets like lack of energy, diarrhea, dry mouth, low blood pressure, loss in appetite, tiredness, etc. Another thing to be noted is that dogs are cats may be more sensitive to THC, the main psychotropic compound of cannabis, than humans. THC is an intoxicating compound that can cause psychotropic issues in pets, especially in dogs, because they have a greater number of cannabinoid receptors in their brain, so they are at high risk of intoxication than humans. Full-spectrum hemp contains a low amount of THC, so you should start dogs and cats with a small dose of CBD and examine its effects.

Although research in dogs and cats for the usage of CBD oil is limited, early studies and surveys show that CBD oil can benefit dogs and cats in many common health issues like arthritis, anxiety, seizures, and inflammation. CBD for pets is as effective as for humans. For best outcomes, full-spectrum CBD oil should use instead of dogs treats.